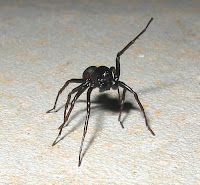 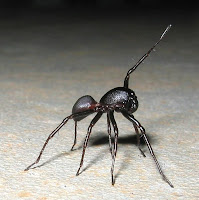 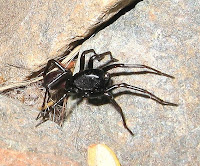 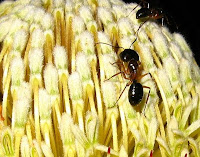 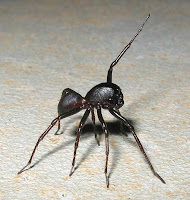 As the Zodariidae family has 19 genera, plus coupled with my lack of taxonomic literature, I am reluctant to place this spider into Storena, although it closely resembles these spiders, except for the lack of spots on the abdomen. It has a couple of most unusual habits, one of which is to hold high one of its front legs, which is similar to a species in my previous post concerning Storena ( Spiders - Modern - Storena sp. 1 ). Secondly, it will stand on tip-toe, which I have not seen with other spiders. Why it should behave so, I can only speculate that it either wishes to appear larger, show off its body to deter or deceive, or as some sort of defensive stance. Whatever the reason it is very strange behaviour.

This spider which is a little over 1 cm (1/2") in length (excluding legs) also mimics ants by holding both its front legs at a low angle above its head to imitate the ants antennae. The size of the spider and the all black coloration brings to mind a local nocturnal broad-headed ant (shown on a Banksia flower), which may be the object of this Zodariidae mimicry. As with other members of this family, it does not build a web, but hunts it prey including the ants with whom it often mingles.
Posted by William Archer at 5:03 PM