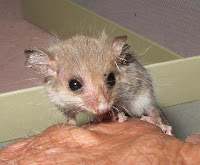 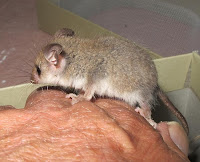 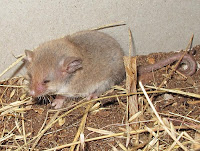 
In the Esperance region I have only seen two of these delightful little marsupials; one was near some exposed limestone in the coastal alkaline sand area 20 km east of Esperance. And the other was way past Israelite Bay where the Nullarbor Plain's limestone cliffs come down to the beach, it had been caught and killed by a feral cat. I have not seen them in the honey possum heathland habitat where I do most of my night-time investigations, although there is considerable evidence that the mallee region could be good habitat for them.

Although called the Western Pygmy Possum, it is found across a number of southern regions in South Australia and into the far western portions of NSW and Victoria. It is a beautiful little animal about the size of an introduced mouse, but with big eyes, forward pointing ears and a long prehensile tail. It feeds on nectar, pollen, grubs and some insects and usually makes a gum-leaf nest in hollows. It is larger and its snout is not as long as the Honey Possum, plus it does not have the brown stripes down the back, so should not be confused with that species, although it may be found in a similar Banksia dominated habitat. Further details can be found here:


Update 27/11/2009 (Photos added)
I had virtually given up hope of seeing another of these delightful possums, but completely out of the blue I received an email from Anne and Shane O'Neill of Esperance that they had caught a Pygmy-possum and would I like to see it. Apparently it had been disturbed when their gas bottles were being changed over, but being a little sleepy during the day, was slow and so easily picked up and placed in a shoe box for safe care, as its nest could not be located.

When I arrived later in the day, the lid was slowly removed to reveal a very sleepy juvenile Western Pygmy-possum. As it was not active I helped it onto my hand where it remained while we took a few photos (shown above) when it was returned to the box. Later at dusk it was released on the trunk of a large Red-flowering Gum near to where it was found and true to form, promptly disappeared.

My thanks to Anne and Shane for permitting me to photograph their cute little possum.