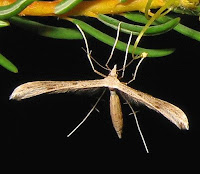 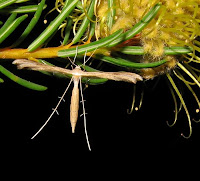 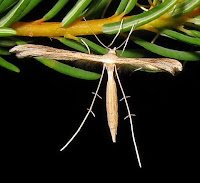 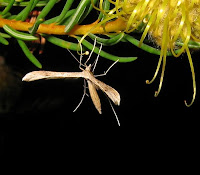 
Moths from the family Pterophoroidae are generally little known, but the group as a whole has nearly 1000 species world wide, with Australia having around 30. As many of these moths are plant host specific, some European species are imported into Australia to biologically control weeds like Ragwort and Horehound. Most of these moths have a most unusual wing arrangement that are not only very slim, but are held rigidly at 90 degrees to their body when at rest. Plume Moths are so called in reference to these strange wings, which in most species are quite feathery at their tips.

The species photographed above had a wingspan of around 2 cm (3/4") and was resting on a flowering Banksia pulchella, although I have no idea if it wished to lay its eggs so the larvae could feed on the flower or leaves, or was just hanging around. I was impressed with the long spines on the fine legs and could not imagine what purpose they might serve, however common opinion considers their general slim shape and spiky legs is an attempt to deceive predators by pretending to be discarded vegetation debris.

Some Plume Moths have quite a distinctive pattern and coloration, but a considerable number are very similar in appearance. Apparently the main way to distinguish between species is by microscopic investigation of their genitals, a delight I have little interest in pursuing.
Posted by William Archer at 5:38 PM