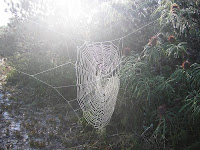 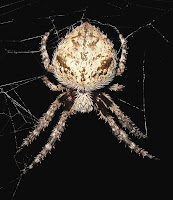 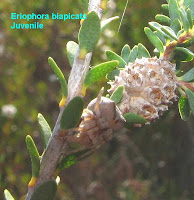 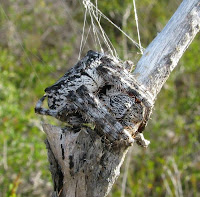 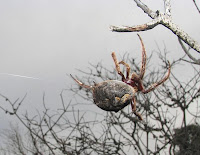 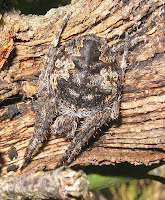 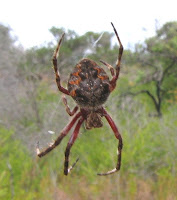 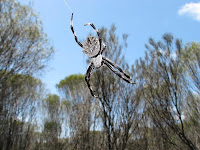 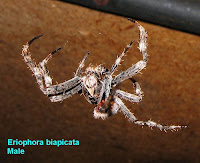 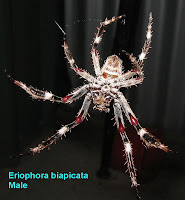 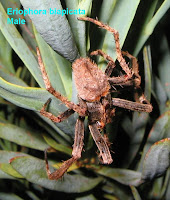 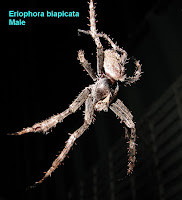 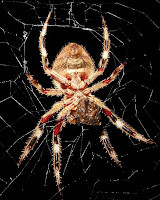 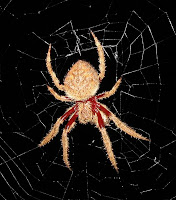 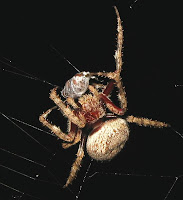 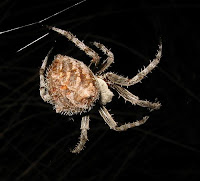 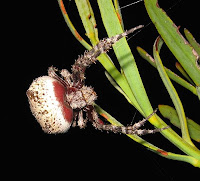 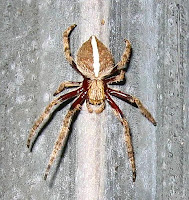 This spider is the sharp horn of the naturalist dilemma, which I shall attempt to explain. Eriophora spiders are large master orb-weavers, building the common wheel-like webs that everyone has walked into at some stage of their life and found themselves face to face with a very bulbous arachnid, which despite your level of panic, is as intent of exiting the situation as you are yourself. Fortunately these spiders are very docile and when examined closely are not that scary, although the male which is also large has a more sinister appearance, but are not so commonly encountered. Eriophora belongs to the large Araneidae orb-weaving family, however in Australia Eriophora is a small genus with five species and only one of these resides in Western Australia, namely E. biapicata. So where could you possibly go wrong?

Above are a number of photos that indicate the huge variation that exists within these spiders. I have numerous photos of E. biapicata, but as I was adding to my collection I quickly became confused as to identity, which continued to grow as did my reference collection. How could a single species be so different, not only in coloration, but in structure and habit. So I sent a number to someone who should know, ie Ron Atkinson of the University of Southern Queensland, who assured me that this level of variation within a species, also applied to other spiders within this genus. So there you are, they are apparently the same spider and therefore the subject of this post!

Eriophora spiders are commonly called Garden Spiders and the female can have a swollen abdomen of between 2-3 cm (1") diameter and are renowned for building these large webs only to take them down before dawn. This certainly applies to many of the local garden spiders and their temporary webs indicate that they are in fact Garden Spiders and not from another genus. However, in the Esperance region this does not always apply as some will maintain the web 24/7 and will often remain on the web during the day. So either their predators are not common in their area, or they have fewer animals crashing into them. The black and white spiders above tend to do this more so than the other colors, and are commonly encountered around the base of granite outcrops, saltlakes and mallee regions, but less so in heathland where other color forms (who usually do remove their webs each day) are more common.

These spiders either die or hide in a warm place during cold winter weather, so at this time of year, you can usually walk around your garden without the fear of literally walking into one. To see how they form the main web structure, note the strong line at the top of the web stretching from one sturdy support to another, from which the wheel part is hung. In order to form this strong line, the spider hangs from one support by a short thread, then releases another into the evening breeze that hopefully carries it across the intervening gap until it sticks on something the other side. The spider then walks across and attaches this thread end to another strong support. Above is a photo of the female casting a thread into a breeze.


Male spiders are labelled male, whilst the more obvious females having the large rounded abdomens are not. For interstate readers, Eriophora biapicata is also found in the NT, SA, VIC, NSW and Qld., but to complicate matters so are other similar looking species.

Posted by William Archer at 4:09 PM