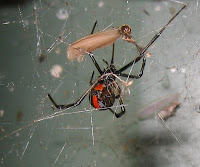 A very common spider in the Esperance region and most of Australia. Closely related to the American Black Widow Spider and like it, the Australian Red-back also has a deadly bite and is particularly dangerous to young children and the sick. There have been a number of deaths attributed to the female of this spider (the male is too small to penetrate human skin), but this was before an antivenom was developed (over 40 years ago) and since then there have been none. Fortunately, they are not an aggressive spider and usually only bite when picked up, or if firm direct (mostly accidental) contact is made with them.

Their tangled-web is usually made well within 1/2 metre from the ground (1' 6"), with the main part under a overhang that will provide dry shady conditions. It is an untidy web with the upper part being very tangled and entwined with many silken threads extending to the ground where fixed and several sticky droplets attached. When something small wanders into one it becomes stuck to the droplets and the thread will break off at the base. The thread is in tension so when this happens, the captive is lifted into the air where it can be dealt with once it tires. These threads are very strong and I have seen geckos and small skinks caught in them unable to escape. Frogs and large spiders including trapdoor and wolf spiders are also caught and eaten.

The female Red-back Spider is mostly a glossy black with a scarlet stripe down the back and a similar colored hour-glass marking under her abdomen. The markings on some spiders are a bright orange and some have no markings at all, but I have not seen the latter in this area. They vary a little in size from 10 mm to 15 mm (1/2") most of which is a bloated round abdomen. 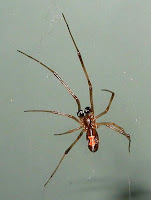 The male red-back spider is tiny in comparison to the female and usually less than 5 mm. (around 1/8") and although there are often more than one in the females web (they don't build one themselves) and are seldom noticed. They too usually have similar red marking on their body, but not as pronounced. 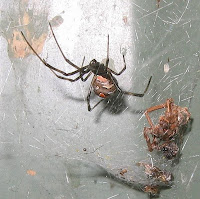 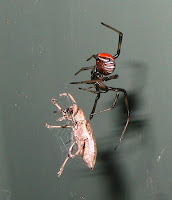 Red-backs are quite social and often have their extended family staying in the large female's web. Sometime a mature female will also be present, but she is always smaller. The juvenile female has very attractive stripes down the sides of her abdomen that will be lost when she matures. 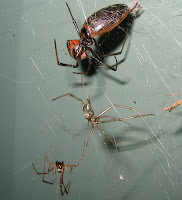 Juvenile males are quite weird with little coloration and appear to be something from another world.

A juvenile female Red-backed Spider with a mature male.
Posted by William Archer at 7:52 PM