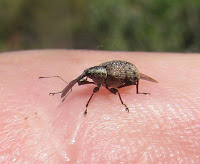 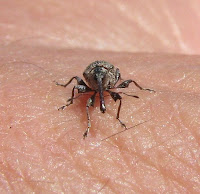 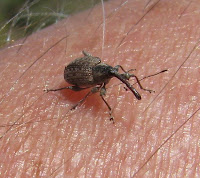 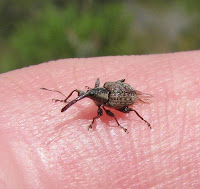 
The Meriphus genus is part of the very large weevil subfamily Curculioninae, which includes thousands of species worldwide. This group have elbowed antennae and a scape (first antennae segment) much longer than any other segment and although the snout length varies considerably, Flower Weevils have extremely long ones to enable the insect to reach deeply into the blooms.

Meriphus australis is only a small beetle of 5-8 mm (1/4”) in head/body length (including snout), but has proportionally one of the longest rostrums of over a third of their entire length. With this they access and consume various floral parts and in particular pollen, during which microscopic accumulations become attached and passed to other flowers and shrubs to enable cross-pollination.

Apparently this beetle species is restricted to Western Australia, although other long nosed flower weevils commonly occur elsewhere, but due their small size, these endearing little beetles usually go unnoticed. The one above was photographed at the end of January.

Further reading:
A Guide to the Beetles of Australia by Hangay and Zborowski.

Posted by William Archer at 4:59 PM