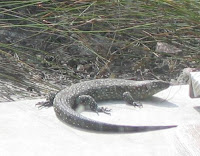 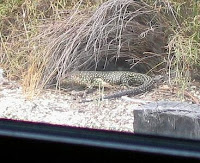 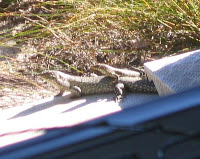 
The largest skink in the Esperance region, growing to well over half a metre in length and unlike the other two large skinks (Shingleback and Western Blue-tongue), these guys are very fast moving and even where common you can miss seeing any, although you will hear their noisy retreat as they disappear into dense vegetation. Yet these are rare in the Esperance region, although common elsewhere like the offshore islands and rocky outcrops further to the west. Again I put this scarcity down to predation from cats and foxes, plus limited habitat suitable for their retreat. The latter is most important as these large lizards are very sociable and will stay together as family units for several years, much of which is spent around the home site.

This large lizard can be mistaken for a goanna if only seen for a fleeting moment, but the speedy retreat, shorter legs and lower level that the head is held will easily distinguish it. Like the other large skinks it has a wide ranging diet, eating vegetation, invertebrates, small vertebrates and even carrion. The King's Skinks I have seen in the Esperance area were all heavily mottled with lighter spots on a darker background, but in other areas that coloration is restricted to young animals and the adults can be very dark with no mottling.

For more information about the sociable nature of these lizards see here:
http://natureitems.blogspot.com/search/label/39.%20%20King%27s%20Skink

Posted by William Archer at 6:26 PM