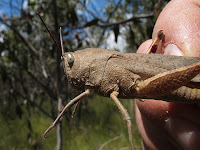 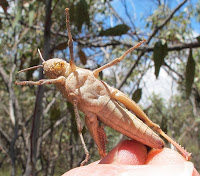 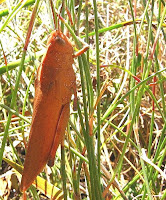 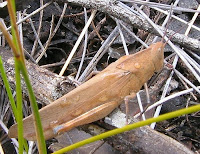 Goniaea is another genus in the large grasshopper Acrididae family and commonly known as Gumleaf Grasshoppers because they resemble dead foliage to conceal themselves in ground leaf-litter, as such several of these Gumleaf Grasshopper species are very similar in general appearance. To distinguish Goniaea vocans, the paraglossae (throat projection) is peg-like with a couple of small points; also the high ridge of the pronotum (plate behind the head) has a notch where it intersects with the last vertical groove (sulcus).

Goniaea vocans is quite a large grasshopper with females reaching over 6 cm (21/4”) in length, but the male is much shorter being only 4 cm (13/4”) excluding the antennae. They can be seen during the day as they move aside to avoid being stepped upon, but they are most active at night when they feed on the foliage of surrounding live plants.

Locally, the ones observed have been on low-lying flood plains or around swamps (cool and moist in an otherwise dry environment) that are not too overgrown. Here they have been seen from December to April, although infrequently.

My thanks to Dr David Rentz for identification.

Posted by William Archer at 3:37 PM