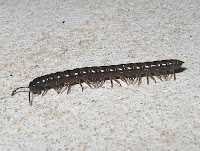 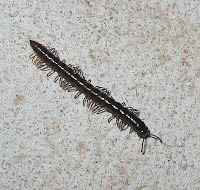 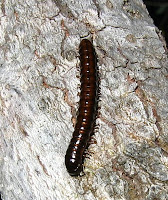 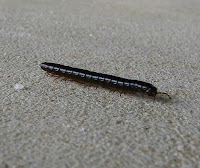 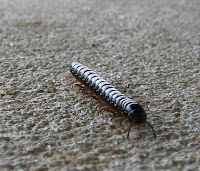 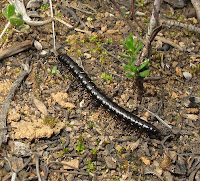 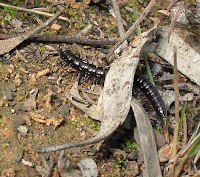 
The numbers involved when dealing with invertebrates are truly staggering, for instance with Millipedes worldwide, there are 15 Orders of which 9 are represented in Australia and most of these have several families, each with many genera and those with a long list of species. However, despite these mind-blowing details most people only think of the introduced black Portuguese one when millipedes are mentioned. Yet of the hundreds of Australian species, most keep to themselves, which has meant these animals are largely unknown.

The Order Polydesmida is the largest of the 15 Orders with nearly 3,000 named species worldwide, but this figure is not representative, as the actual figure could be several times that amount. This is because many species have only small ranges and will not move further afield, to the extent that some will not enter another species territory and with a country the size of Australia, vast areas have not been investigated for these animals. The family Paradoxosomatidae that covers the millipedes shown above, tend to be very similar in appearance and are probably in greatest need of research, and to confuse the matter further, there is another introduced species called Oxidus gracilis the Greenhouse Millipede that is similar looking and also found here.

Most female millipedes lay their eggs in the ground a few centimetres (1”-2”) below the surface, which for the Portuguese millipede can number well over 200 eggs. So earth and potted plant movement may explain how this introduced species has managed to colonise areas of human occupation so effectively, yet is rarely encountered in undisturbed naturally vegetated regions between.

Polydesmida millipedes have between 18 and 21 body segments, whereas the Portuguese one has between 40 and 50, so their identification should not be confused. Polydesmida millipedes are blind and live in leaf litter, feeding on decaying plant and animal matter. As a defence they roll themselves into a tight ball and discharge a highly smelly and distasteful substance, consequently most predators keep their distance, although some primitive burrowing spiders will readily feed on them.

Millipedes differ most obviously from centipedes by having 2 pairs of legs per body segment, against the latter with only one pair.  Polydesmida species range between 2 - 4 cm (3/4”-11/2”) and the above were found in near coastal heathland or the inland mallee region, with all being discovered after rainfall from April to August.

There are five different individuals shown in the above photographs.

Posted by William Archer at 7:18 PM