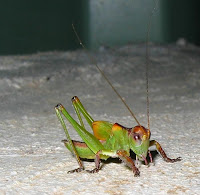 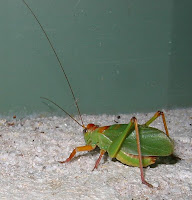 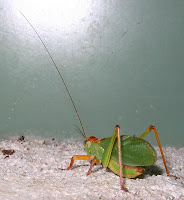 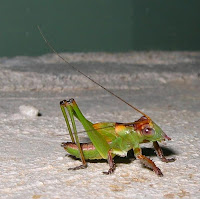 According to the Australian Faunal Directory the Tympanophora genus currently has 14 species and is another member of the increasingly large Tettigonioidea family, which are commonly known as Katydids.

The Small Balloonwinged Katydid is visually one of the most appealing of the katydids, particularly the instar (undeveloped wings) with an expressive face, big widely spaced eyes and the 'Popeye' proportioned forearms, the latter not repeated in the adult form (my thanks to Martyn Robinson of the Australian Museum for identification).

Both the katydids above are male, the females are wingless and have a long straight ovipositor, and although they are normally accompanied by at least one male I did not notice any nearby, so maybe mine were unattached bachelors. Esperance is reasonably central to the Tympanophora diminuta's territory, having been recorded 40 km (25 miles) east of Ravesthorpe, to near Mt Ragged 140 km east of Esperance, a total distance of around 280 km (175 miles). The territory extends inland for only 50 or so km (30 miles), as the Small Balloonwinged Katydid seems to be largely dependant on heathland and further inland you begin to enter the Mallee zone.

This colorful katydid is around 2 cm (3/4") in length (excluding legs and antennae) and I have noted it in the Esperance district during October and November.
Posted by William Archer at 5:32 PM