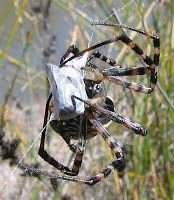 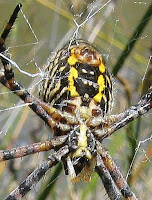 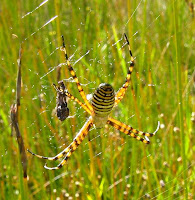 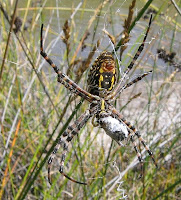 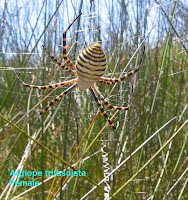 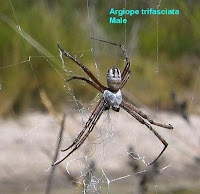 
In Australia the Banded Orb-weaving Spider is recorded only from Queensland and Western Australia, which suggests it is more widespread, but is either rare or poorly collected. In the Esperance region they are to be found on round leaf sedges in low-lying areas that may flood during winter; here they build a small orb web usually within 60 cm (2') of the ground. Like many orb-weaving spiders, there is usually an influx of species during vegetation regrowth after a bushfire, and it is during these periods these spiders are commonly encountered.


Most of the above photographs were taken of a solitary female that had built a web on sedge around a small dam. Apart from a couple of male Banded Spiders, they were the only representatives of this species there, but this year (although the original female has probably died), there would be a dozen or so immature females, all with similar banding and coloration, but currently only around 1 cm (3/8") body length. The larger female was closer to 2 cm (3/4") in length. The males of last year were little more than 5 mm (1/4") in body length and lived on the outer edge of the female's web.


The female mostly remains in the center of the web, with the legs arranged in the shape of a cross and very similar to a close relative, the St. Andrew's Cross Spider (common elsewhere, but not yet seen by me in this district). If threatened, she will drop from the web to the ground and quickly disappear. When an insect flies into her web, she is amazingly fast to grab and wrap it in silk, she then cuts it free, takes it to the center of the web where she bites it.

Sometimes this spider will make a partial stabilimentum (a line of dense white silk built onto the web, which is thought to warn flying birds to avoid collisions). However in this district, adult spiders commonly do not bother and immature spiders rarely ever construct one.

Although brightly colored spiders, they largely go unnoticed unless searched for, as their banding blends into the multitude of light and dark shadows generated by the fine leaf sedge. However if you are in that type of habitat, look around at knee height and you may find one. They are regarded as harmless to humans and are not aggressive.

Posted by William Archer at 6:30 PM