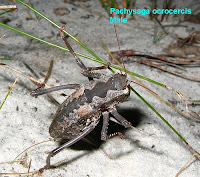 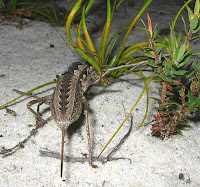 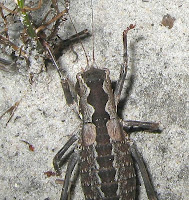 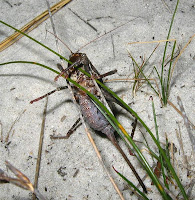 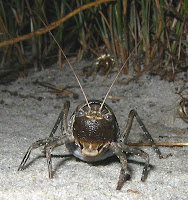 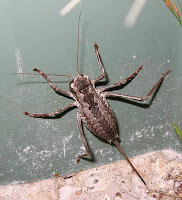 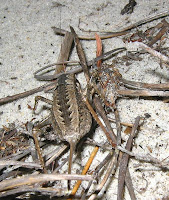 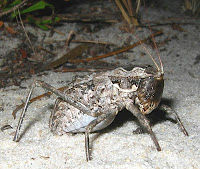 
The Tettigonioidae family is the largest family of Australian crickets with over 900 species. Common names for this extensive group are Katydids, Bush Crickets and Longhorned Grasshoppers, the latter included due to their long antennae, a basic feature separating them from Grasshoppers that have short antennae with less than 30 segments. A larger distinction separating Grasshoppers from Crickets, is the Crickets including Tettigonioidae females have a sword-like appendage projecting from their abdomen called an ovipositor, which is used to reach deeply into nesting materials in order to lay and keep their eggs out of harms way. Female Grasshoppers do not possess an ovipositor, but lay more eggs to counter any predatory activity as a result of a more shallow nesting site.

Pachysaga ocrocercus (kindly identified by Dr David Rentz) is a large tubby Bush Cricket with a body length of around 3 cm (over 1"). It is commonly found on deep sandy soils and occasionally on granite outcrops, and may be encountered during the day although they are more active at night. Their longitudinal brown markings allow them to blend into leaf-litter, providing they don't fall upside down like one photographed above, to reveal an attractive white spotted purple tummy, which rather destroys the effect of their well camouflaged dorsal coloration.

Despite their typical cricket/grasshopper shape with long rear legs, they do not hop, but slowly walk away with great purpose, usually to the nearest clump of vegetation in order to hide. Females are seen more frequently than males, although the males have less need to expose themselves to lay eggs, so may be more common than they seem to be. Pachysaga ocrocercus is somewhat ungainly when climbing sedges and shrubs and are usually found either on the ground or within 30 cm (1') of it. Locally I have recorded them from August to December and again in March, they favor calm although not hot or cold conditions, but with reasonable humidity. Egg laying has been noted over most of this period.
Posted by William Archer at 7:08 PM