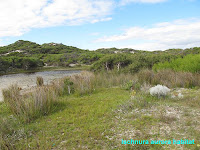 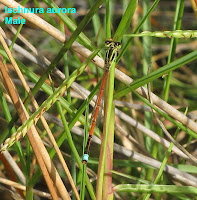 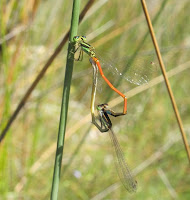 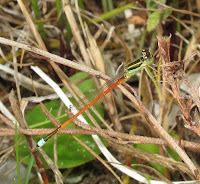 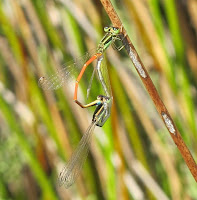 
There are only three Australian Ischnura species and all occur overseas with Ischnura aurora the most widespread, being recorded throughout Australia, India, to our north, plus many Pacific Islands. However they are not overly common in the Esperance region and to date I have only seen them at the mouth of Stockyard Creek, 14 km (8.5 miles) east of Esperance.

Ischnura belongs to the Coenagrionidae family that is only represented in Western Australia by three other species: Ischnura heterosticta, the Common Bluetail that I have not yet encountered, plus Austroagrion cyane (South-western Billabongfly) and Xanthagrion erythroneurum (Red and Blue Damsel), both of which are detailed here. Male damselflies in this family are often strikingly coloured in reds, blues and contrasting black.

The Aurora Bluebell is a tiny damselfly, being between 1.5-2 cm (3/4”) in length and very slender. As they tend to perch for long periods they are very difficult to spot unless disturbed, this includes the brightly coloured male. They do not appear to be strong fliers, which is surprising considering their distribution, but move slowly and deliberately rather like a large mosquito. The greenish coloration of the female makes her particularly difficult to spot as she just disappears amongst similar coloured foliage.

I have included a habitat shot where I found this damselfly; this held approximately 20 or so individuals in an area 40 x 20 metres/yards on a bend near the edge of the creek. They mainly spend their time on the round-leaf sedge or the couch-like grass, but as the sea is only a single low dune (200 metres/yards) away, it could become very windy. At these times, they can shelter behind those larger Melaleuca shrubs that have small sheltered openings on the far side also containing their preferred grass and sedge.

Posted by William Archer at 5:54 PM