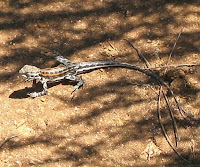 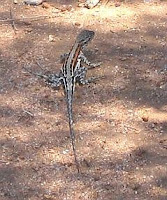 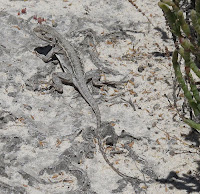 
I came across this snappily dressed dragon, resplendent in military dress coat in the mallee near Mt Ridley, NNE of Esperance. Fortunately the subspecies C.m. griseus is the only one in the Esperance region (mallee only, not found in the Esperance coastal region), as they vary tremendously in markings and coloration. To identify them where their territories overlap, you would need to catch them and check out the skin pores just before the vent and under the thighs (in case you are tempted, they can run very fast).


Despite their grand appearance, the Military Dragon is quite small, growing to a little over 8 inches in total length (21 cm) and unlike the dwarf Bearded Dragon does not have spiny scales along its flanks. Interestingly, these lizards feed mainly on ants which may reflect their smaller size.


Update December 2010
Photos of a very different coloured Spotted Military Dragon added, showing how reptiles adapt to their environment. The grey form was the norm with dragons around saltlakes in the mallee region to the north of Esperance, where very common. They were not observed on the actual dry lake, nor the dominant surrounding samphire, but in the spaced grass tussocks and shrubs just behind that, where they would dart at great speed between cover if disturbed.

Posted by William Archer at 6:20 PM