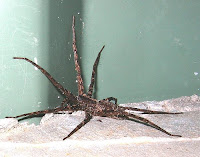 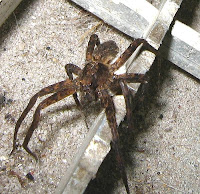 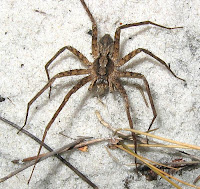 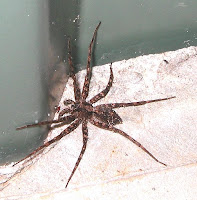 
A common spider in the district and usually found at night on the ground, or in low twiggy vegetation. Their eyes brightly reflect a torch beam and they can be easily detected by holding a torch to your eye and scanning at or near ground level. Although closely related to the fishing spiders, these tend not to be as large with body length usually less than 2 cm (3/4"), with a span of around 6-7 cm (less than 3").

The general appearance of these spiders is in many ways very similar to Wolf Spiders from the family Lycosidae. The main difference (without microscopic examination) is the eye arrangement and size. These spiders (Pisauridae) have two curved rows each of four eyes, with all being similar in diameter, or the top four slightly larger than the lower row. The Wolf Spiders on the other hand have three rows, the bottom row of four small eyes, then the row above with two large eyes, and above them (and further apart), another two smaller eyes.

Another obvious difference between these spiders is the female Nursery-web Spider carries her egg sack immediately below her body, whereas the female Wolf Spider drags the sac behind her. In one of the photos above the female is guarding her egg-sac below her.

These particular Nursery-web Spiders do not require the presence of water to survive and can be found on any night that is not too cold, windy or dry. These as with most nocturnal spiders are usually most active when it is warm, calm and humid.

I notice in Wikipedia that they have a list of Pisauridae genera and species that is claimed to be current 2008, of which they list three species (all Dolomedes) that are found Australia wide, which presumably includes the Esperance region. One is Dolomedes stilatus that I believe is the common Fishing Spider found here (see post), and the other two are Dolomedes facetus and D. mirificus. It is therefore likely that one of these species is the subject of this post, but unfortunately I do not have the taxonomic details to determine the situation.
Posted by William Archer at 5:03 PM