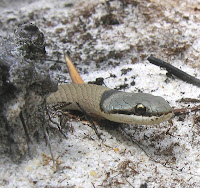 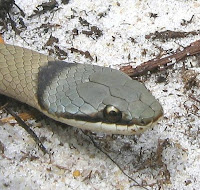 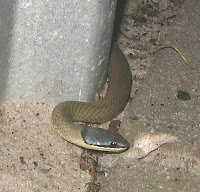 
A common snake (less than 2' 6" or 690 mm), so slightly smaller than the Bardick Snake and not so stocky. Coloration is often similar to the Bardick, although more an olive grey to olive brown, but could be confused with it unless the head region is slighted. This is quite distinctive being a bluish grey with a broad dark band across the neck that extends around through the eye to the snout. This dark band is underlined by a prominent white one in the area of the mouth.


The Western Crowned Snake is active throughout the day and for most of the year, providing it is not overly hot or cold and are commonly seen sunbaking on flattened sedge/grass or sandy patches. Often they freeze and can be approached, but a sudden movement will send them madly squirming (but making little progress) into nearby vegetation. They hunt frogs around swampy areas and small lizards on higher ground. But they too are hunted by cats who take quite a number, not so much for food (although sometimes they will eat the lower body and tail section), but to play with and when finished, kill them by a bite to their head or neck.

The venom of crown snakes is not known to be dangerous to people, plus they are most unlikely to bite as they are not aggressive and just want to get away. So please let them do so.

Posted by William Archer at 4:41 PM