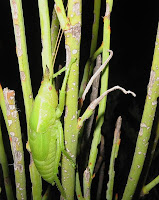 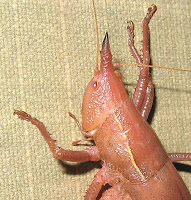 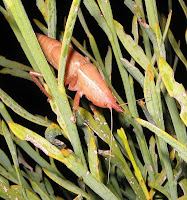 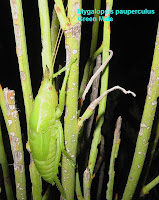 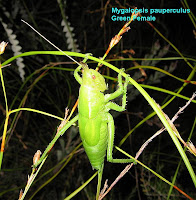 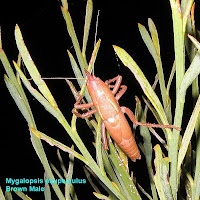 One of the most endearing katydids, looking like a cheeky hybrid between a weasel and a prawn, but like other katydids it belongs in the large and diverse Tettigoniidae family. Those character laden small beady eyes either side of that long pointed snout and the even longer whiskers (antennae), present an impish little face full of inquisitiveness, but it is not as it looks! The eyes, snout and antennae are at the top of the head, whilst the mouth parts are tucked tightly in, permitting it to feed freely whilst still looking for predators, and if one appears, it can use the snout like projection to deter an attack. Such a defence would obviously be largely bluff, but with a large slow moving animal like this katydid, any additional defence other than from a green or brown camouflage that may or may not work, must be a plus.

It is interesting to note that this katydid has a green and an orange/brown form, which is independent of gender. I asked Dr David Rentz (who kindy identified the species) the reason for these color forms and he thought it a likely safeguard where at least some animals would be camouflaged regardless of environmental conditions. My observations are too limited to be little more than guesswork, but with the animals I noted, the green females were seen during spring and early summer, whilst the brown females were noted during the dryer summer/autumn. Males of both green and brown were encountered in the middle period during January. So seasonal environmental conditions may also play a role.

Whilst browsing the web I came across the following regarding the coloration of another Mygalopsis species that may also be pertinent here.
The environmental control of colouration in a bushcricket, Mygalopsis marki Bailey (Orthoptera: Tettigoniidae)
A. J. LYMBERY, Department of Zoology, University of Western Australia, Nedlands 6009, Western Australia and Department of Agriculture, Baron-Hay Court, South Perth 6151, Western Australia
Abstract
The environmental factors proximately influencing variable colouration in the bushcricket, Mygalopsis marki, were studied in natural populations and under controlled laboratory conditions. Two major components of variable colouration were identified; a green/brown dimorphism in ground colour hue (dominant wave length) and continuous variation in the darkness of brown insects, representing a contrast between ground colour value (brightness) and the intensity of overlying black pattern. Ground colour hue differed between natural populations in different seasons and at different localities. The proportion of brown individuals was greater in populations developing over late summer than over spring at the same locality, and in populations from drier localities, as indicated by vegetation type, in the same season. Experimental studies showed that colour change occurred at moults, with green colouration promoted by increased water intake in developing nymphs. Ground colour value and pattern differed between natural populations at different localities, but not in different seasons. Ground colour value was less, and pattern was greater, in populations from localities with a dense cover of forbs and grasses. Experimental studies showed that ground colour value and pattern were influenced by the intensity of incident radiation received by developing nymphs, with decreased intensity promoting lower value and greater pattern.

The Slender Snout-nosed Katydid is one of five species listed in the Australian Faunal Directory, which collectively are known as Sluggish snout-nosed katydids. Mygalopsis pauperculus is restricted to the southern near coastal region of WA and has a head/body length of around 5 cm or 2".

Posted by William Archer at 6:12 PM