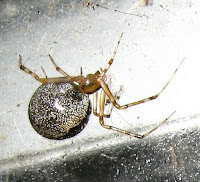 A small species with the larger females being around 6 mm (1/4") in body length, they can often be found in considerable numbers around the outside of window frames (they are rarely seen inside). Its fangs are probably to small to penetrate human skin, but like most spiders, the potency of their venom is unknown and they should be treated with respect and not handled.

These Comb-footed Spiders are in the same family as the highly venomous Red-back and Black Widow Spiders, however these other family members are only known for giving the odd painful bite and are not generally considered dangerous, but coming from such a notorious family it would be wise to treat all with caution and not handle them. In the Australian section of the Theridiidae family, there are around 100 species divided into 16 genera, so apart from the Red-back, many tend to look very similar and are not easy to positively identify. They are called comb-footed spiders because of the forward facing serrated hairs on their hind legs, which are used to comb out wide sheets of silk when wrapping captured prey.


In the photographs there are at least 2 or maybe three species. Those with the darker marking on their back are slightly different to the others, although their shape is very similar. To identify similar looking spiders it is important to note their web/retreat and preferred habitat. With the spider in the top three photos, they prefer to make a small untidy web/retreat in the corners of windows, preferably with a light shining through at night to attract small flying insects. The other two photos are spiders that prefer a more lofty open space close to a roof, constructing a more typical Theridiid web of long sticky threads attached to an upper tangled one in a darker location.

The above examples show a preferred habitat and probable prey difference, but there is a more obvious differing characteristic, that being the egg-sac. One has a parchment like sac, whilst the other a soft finely woven one indicating clearly they are separate species. Therefore if you are wandering around and see very similar looking spiders, don't rely on initial observations, have a closer look and you may find you have more than you first thought. 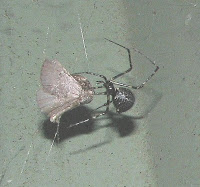 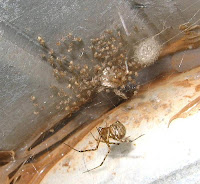 These two Comb-footed Spiders are a little larger than the above species, being around 10 mm (3/8") in body length and are also outdoor types, rarely if ever entering houses. It is possible they are the same species, as these heavily mottled varieties often come in lighter and darker combinations, but I would not place any money on it. Theridiidae species of this size probably can penetrate human skin, so definitely a no, no, regarding handling.

Posted by William Archer at 6:19 PM