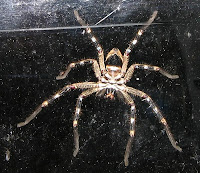 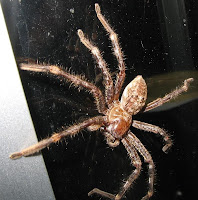 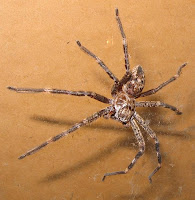 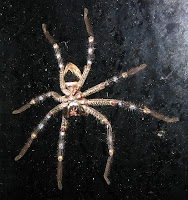 
These widespread spiders (previously placed in the genus Olios), like their sister Huntsman species belong in the revised Sparassidae family. They are generally smaller than the more common huntsman spiders, with a body length of around 2 cm (3/4") and a total span of 7-8 cm (3"). On the underside of their abdomen they have a shield-like marking (the badge), which varies in color and design depending on the species.
There are other differences between these spiders and the larger huntsman species; with badge spiders the abdomen is not as flat and the carapace is domed, so they are less adapt at hiding in narrow places like under bark, but instead prefer to live in burrows that have been abandoned by other invertebrates. Some badge spiders will construct a burrow of their own and may even make a door for it, so they are very different from other huntsman spiders. Nevertheless, they also actively hunt at night without a web, and although they tend to remain on or near the ground, they can climb smooth vertical surfaces with ease. Their eye arrangement is also similar.

The under-surface of the legs are quite colourful, with blue, yellow and white bands. They tend to stand higher off the ground than other huntsman too. However these badge spiders should not be handled as some will bite and their venom (although not fatal), is a lot more toxic to humans than other huntsman spiders and can make you sick.

Posted by William Archer at 2:27 PM