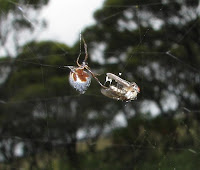 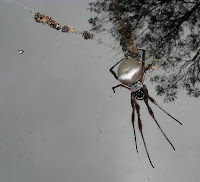 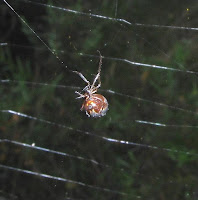 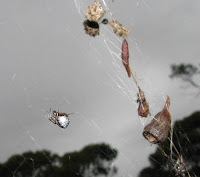 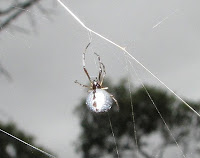 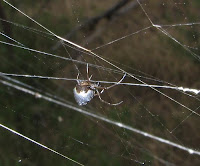 The Dewdrop Spider is also known as the Quicksilver Spider because of their bright silver abdomen, however these are minute spiders, being no larger than a match head (2-3 mm or less than 1/8" in body length) and so are not noticed unless sought. Small size can nevertheless still be an advantage in making a living, for these are kleptoparasitic, which means parasitism by theft and they live permanently as a parasite in the webs of large orb-weaving spiders and particularly the widespread Golden Orb-weaver, Nephila edulis ( Spiders - Modern - Golden Orb ), but they will also occupy other spiders webs. What the Dewdrop Spider seek are large permeant webs made by large docile spiders.

These small spiders actually do the large spiders (whose web they cohabit) a favour by keeping the web clean of tiny flying insects that are much too small for the larger spider to be bothered with, however the dewdrops are not too timid to take a share of the larger spiders meal and will even partake at the same time. The dewdrop spider is quite communal and webs can be occupied by several individuals, but being so small, having others on relatively vast webs that can stretch for 2-3 metres, any disruptive interaction over territory is probably unlikely.

One of the photos above show a juvenile Golden Orb Spider with a dewdrop spider off to the left. It is interesting to note the similar silver reflective color of the larger spider, and as many of the large orb spider hosts reflect light in this manner, I wonder if the silver coloration may have an influence regarding the small dewdrop spiders acceptance within the web.

Posted by William Archer at 6:55 PM