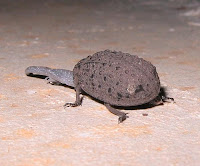 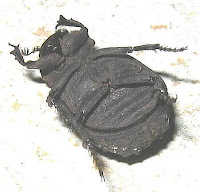 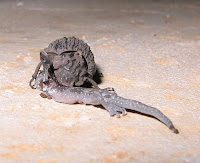 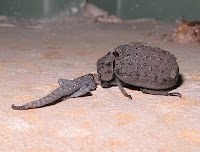 
These are heavily armoured beetles with an ornamentation of bumps and ridges along their backs. In Australia there are over 50 Omorgus species with the greatest concentration occurring in drier regions. They can vary in size from 4 - 20 mm (less than 1/4" to over 3/4") in length and their family Trogidae, can be found in many parts of the world.

As a group, they favour the dried remains of dead animals and from the long list of carrion eating insects, they are amongst the last to arrive at the corpse. In part they do so to lay their eggs under the carcass, thereby providing the larvae with plenty of dried skin and mummified parts, which they will greedily consume. However, this is not always the case with adults, as small fresh food items are promptly eaten when encountered, although mating and egg-lying will not take place.

The local Omorgus species are black to a dark brown, thickset and grow to around 1.5 cm (over 1/2") in length. They are commonly attracted by house lights and can usually be found helpless on their backs below lighted windows. Nevertheless, the smell of carrion on a gentle breeze will bring numbers on a calm night.

With a large fresh carcass, they may wait a few days for other beetles to arrive and for the multitude of early feeding insects and maggots to reduce the corpse, so in the meantime they will wander around the extremities, picking up morsels of food including the odd maggot. However, when small parcels of carrion are encountered elsewhere, they will consume as much as they can. The above photograph of a very young lizard 3 cm (less than 11/4") in length, shows the amount one of these Carcass Beetles can eat at a single sitting. I am not sure how this baby lizard met its end, but I would be surprised if it was killed by the beetle, although stranger things have happened.

These beetles do not enter houses and are seldom encountered by people, unless they are in the habit of going out at night and seeking dead animals, or at least checking below lighted windows.
Posted by William Archer at 6:14 PM