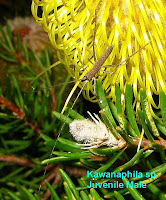 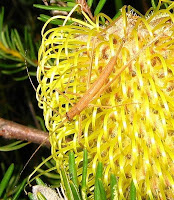 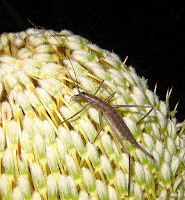 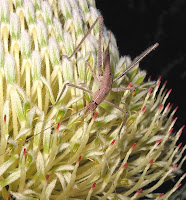 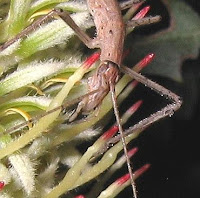 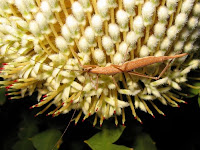 The genus Kawanaphila currently has 11 species that were described by Dr David Rentz in 1993. and who has also kindly identified the above specimens. These katydids form the major portion of the Subfamily Zaprochilinae, which contains 3 other genera and a total of 17 species and all are characterised by having specialised elongated mouth parts to enable them to reach, collect and feed on nectar/pollen, which in the process may also pollinate the flower. A previously posted katydid species Windbalea viride (http://esperancewildlife.blogspot.com/2009/07/green-westwind-katydid-windbalea-viride.html) is another member of this group and although strongly winged, has a similar mouth structure. There are 2 known Kawanaphila species in the Esperance region, K. mirla and K. yarraga, but there could be more involving range extensions of the other species, or the presence of unknown species. From the photographs above there looks to be at least 2 species, but microscopic inspection is required and for that you need the katydid.

These katydids are quite common in the Esperance region and seem to favour Banksia blooms, interestingly, most of these insects are females, with only a single juvenile male recorded. As the males of these insects are apparently not territorial, I personally wonder about the evident shortage. Size wise (head and body), the orange ones tend to be a little larger at a little over 3 cm (1"), whereas the darker ones tend to be smaller.

Unlike most crickets and grasshoppers, these katydids are most active during winter/spring, particularly in July, but I have also recorded one feeding in October. These katydids are nocturnal, so use the coldest part of the day during the coldest months. The only reason that comes to mind for this unusual insect behaviour is there are considerably less predators around at these times. I would also imagine being perched on a large flower where you are highlighted, have your head down feeding for extended periods and owing to your nectar feeding lifestyle would probably taste rather nice. So based on that, going to such lengths to avoid predators seems quite reasonable.
Posted by William Archer at 4:19 PM