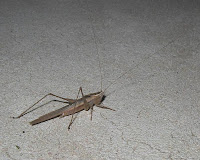 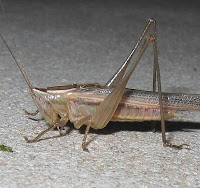 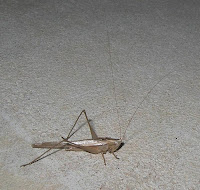 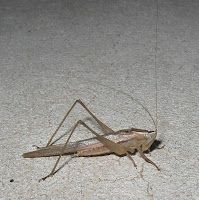 The Conocephalus genus is apparently still very much a work in progress with many species undescribed. The last time the Subfamily Conocephalinae was comprehensively reviewed, was in 1891 by Redtenbacker when collections were much smaller and many species unknown. Dr David Rentz has done a considerable amount of research into this group and even after describing a number of new species, admits there are many pieces of the taxonomical jigsaw yet to be fitted together. Conocephalus upoluensis was initially only thought to exist on Norfolk Island, but in his most recent book "Grasshopper Country" states this species is the most common of the Meadow Katydids and personally identified the one in the above photos as the same species, which were taken in WA near Esperance. Yet if you check the internet, there are many references (some from highly authoritative organisations) that still regard the Upolu Meadow Katydid in Australia as having a solely Norfolk Island distribution, which I suspect only reflects the current confusion over the identification surrounding this genus. Upolu is an Island of Samoa, which I presume was where this katydid was first encountered, or thought to originate.

There is currently around 30 Australian Conocephalus species that are also known as Longhorned Grasshoppers, although they are only distantly related to grasshoppers, so not a good common name and Meadow Katydids is far more applicable. However these katydids apparently consume grasses, sedges and broadleaf sedge like plants. Around Esperance besides the Stipa (Speargrass) species, there are few native grasses, but we do have many sedges and sedge-like plants from which they presumably feed, unless they have developed a taste for introduced grasses of which due to farming we are resplendent.

This Meadow Katydid is not very large with a head/body length of around 2 cm (1"), but with the much longer wings, an additional 50% or more can be added to it physical appearance. Whether I have just overlooked these katydids I cannot say, but I have not found them particularly common and as the male above was recorded in late March, it is possible with their large wings, they fly in on the strong easterly winds that prevail during summer.

My thanks to Dr David Rentz for identification.
Posted by William Archer at 5:50 PM