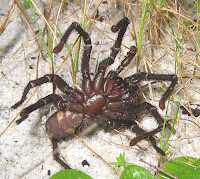 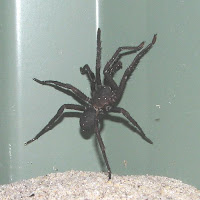 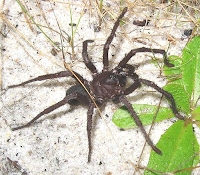 A common spider of the Esperance region, although I have only seen the male (the female remaining hidden in her burrow). The mature males of this species are the largest of the burrowing spiders in this area and are commonly between 20-30 mm or over 1" in length (excluding legs and palps). But when the legs are taken into account they span nearly 100 mm or 4" (although most would be smaller), also as they are usually very black and hairy, they are not the sort of thing you can easily ignore.

The Esperance region Giant Trapdoor Spiders are not aggressive unless provoked and will play dead when being examined. However, do not place your fingers too close as they can be very fast and will possibly bite. On one occasion I encountered a very large male and took a few photos with the flashlight, which did not impress him at all. I had a plastic ruler and wanted to measure him so placed it 50 cm (2’) to one side when he was at rest, but no sooner had I put the ruler on the ground, when surprisingly quickly he jumped upon it and tried to bite. So treat these guys with respect, for although they have not brought anyone close to death’s door, they can inflict a deep and painful bite.

For the arachnophobes, these spiders only come out at night and can be encountered anytime except when the weather is hot and dry, or cold and windy, so unless you go looking for these spiders on calm humid nights, you will probably never see one. Although a couple who were camped near the beach told me they found two large ones close to their tent, which even I would find a little unsettling.

The frog by the way did not eat the spider; they just passed in the night.
Posted by William Archer at 7:20 PM