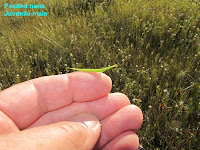 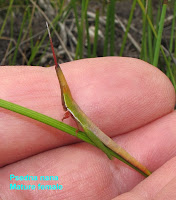 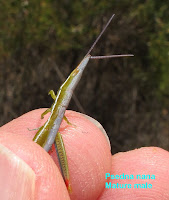 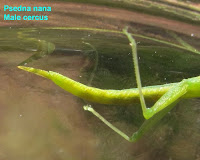 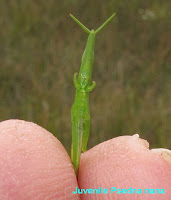 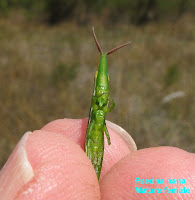 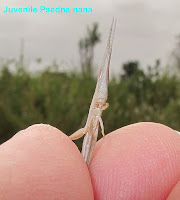 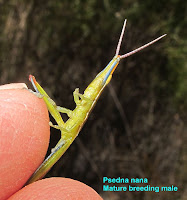 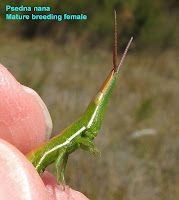 
These unusual grasshoppers belong to the Pyrgomorphidae family, which in Australia has 20-30 species that are quite unlike most others. Currently there are three Australian Psedna species, but only one in WA restricted to the SW region from Kalbarri (north of Perth) around the coast and near coastal districts to Israelite Bay (east of Esperance). It has also been recorded SE of Adelaide and inland NSW.

Although not widespread, Psedna nana can be locally common in low lying winter wet areas, where it lives on round leaf sedges. The Variable Psedna is well suited to this environment by being slender like the sedge and having four short front legs to grip them. They are quite agile and to outwit predators, will leap a metre or two, or move to the  opposite side of the stem and if necessarily progressively move around it to avoid detection.

There is another similar looking grasshopper in the same family, but from the Propsednura genus, which overlaps P. nana in the Esperance region, but I have only encountered this species in dry heath. Nevertheless, swampy regions often abut heathland, so between Perth and Esperance, extra care should be taken particularly with juveniles. Locally the colours of the mature Psedna nana are reasonably consistent, but juveniles can differ radically.

The females of Psedna nana grow to 45 mm (nearly 2”) in length, but the mature male to only 32 mm or 11/4” (excluding antennae). Both are wingless or have tiny and totally ineffectual ones that require close examination to even see. Locally, I have seen mating couples during December/January, when coincidentally most juveniles are very small, making identification much easier, whereas later many mature grasshoppers have disappeared, plus juveniles are larger and more common, making identification more complex. However, habitat type and paraglossae details should greatly assist in this regard.

'A Guide to Australian Grasshoppers and Locusts' by Rentz, Lewis, Su and Upton is an invaluable guide for any persons interested in these insects.

Posted by William Archer at 7:58 PM