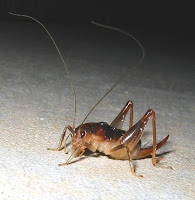 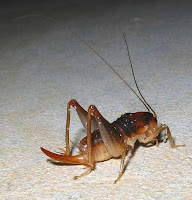 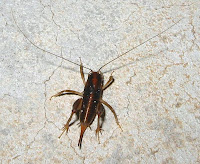 Anostostomatidae is another cricket family thought to be of Gondwana origin, with most genera restricted to the southern hemisphere. In New Zealand they are represented by several endemic weta cricket groups including the Giant Wetas that can reach 10 cm or 4" in head/body length, which are considerably larger than Australian family representatives. Of the Leponosandrus genus, L. lepismoides is the only species, but is widespread in Australia. However, I have not found it to be particularly common in the Esperance region, although this may be due to my limited nocturnal observations and it may be more common elsewhere in the district.

These crickets are also known as King Crickets and are represented by several Australian genera and include others where professional opinion differs, or where further research is required, so like others in the Orthoptera Order, there is much to keep entomologists occupied for years to come.

The diet of King Crickets is quite diverse and includes extensive hunting and scavenging of most animals within its size range, they will also consume many soft organisms, including herbs, fungi and fruits, so they are quite high on the invertebrate food chain, although they too fall prey to large spiders, night birds and small predatory mammals.

Leponosandrus lepismoides is around 3 cm in head/body length (little over 1") and I have only seen them in October, although they must be around at other times, but probably in a more productive location. This I would imagine to be around ephemeral swamps and flood plains, where their preferred food types would be more readily available.

My thanks to Dr David Rentz for the identification
Posted by William Archer at 4:54 PM