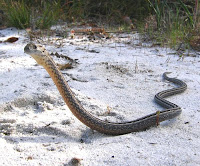 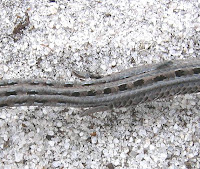 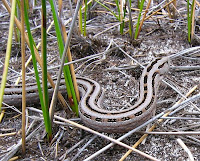 Common Scaly-foot - Pygopus lepidopodus
A large snake-like lizard that not only looks like one but behaves like one too. Growing to around 700 mm (2' 4") and the largest Australian Legless Lizard, it is of similar size to the Bardick and Crown Snakes, although unlikely to be confused with them. However it has a very flexible body, being able to raise it to fane an attack, or to wriggle in an exaggerated manner. You could say it looks more snake-like than a real snake. But look at the tongue, with the scaly-foot it is broad and flat, whereas snakes have a long, thin forked one.
These legless lizards are quite common in coastal and sandy heath zones, and are often found sunbaking in the morning, where they will remain motionless if approached slowly and non-aggressively. But once they realise they have been spotted they are off and if stopped, will rear up in a very threatening manner, however if you hold your ground, then they will also hold theirs and so it becomes a Mexican stand-off.
These lizards are completely harmless and their bravado is all bluff, but this is also known to their main predator, ie the feral cat. I have encountered many of these delightful creatures that have been killed by them. These lizards and the local similar sized crown snake would be the most common victims of the cat, which kill them but usually leave them uneaten. In one of the photos above is the scaly feet of this lizard, it too was a cat victim.
The Scaly-foot is quite variable regarding coloration and markings, some a light grey, others a reddish brown, although they usually have some lateral markings varying from colorful and pronounced, to a few well separated bars along the back. They eat a range of invertebrates and apparently have a liking for Wolf Spiders where they will even go down their burrows to get them. This may be why Wolf Spiders are not very common around here.
Posted by William Archer at 5:42 PM