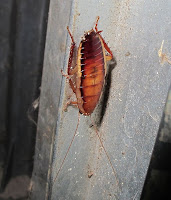 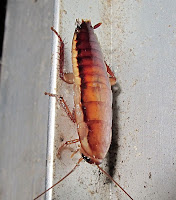 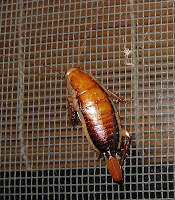 
This species has also been known as Cutilia heydeniana (amongst others) and is another member of the Blattidae family. Locally in sandy Banksia heath, it does not seem to be common unless not attracted to house lights, whatever the case I have rarely encountered it.

To quickly separate it from other local species, I have called it the Golden Cockroach, but the pale margin extending the full length down either side and boarded by a thin dark band are distinctive features. The photographed female was over 2 cm (almost 1”) in head/body length and appeared at night during early February, so Drymaplaneta heydeniana is apparently still active during the hotter time of the year.

For additional details about Blattidae cockroaches, please refer to ‘Insects – Cockroaches’ in the right-hand column.