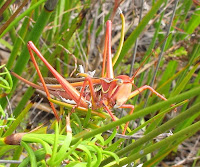 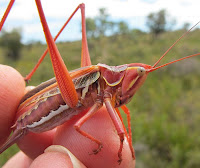 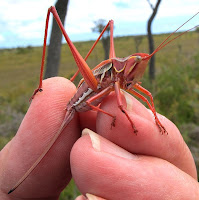 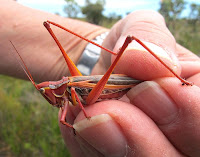 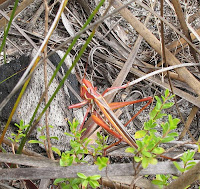 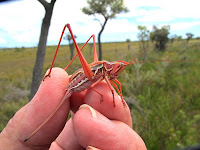 
The katydid usually representing this species has predominantly green coloration (as here), but this orange/brown form is much less common, with the above the only one of this colour morph I have seen. Metaballus frontalis is recorded predominantly in near coastal heath from Kalbarri (north of Perth) to Israelite Bay (east of Esperance), with the above specimen discovered near a flood plain 20 km east of Esperance.

The colour of the above female katydid was most impressive giving the insect an exotic appearance, but it was still reasonably well camouflaged when on the ground amongst the plentiful flat leaved sedge. When disturbed it would flutter, rather than fly 2-3 metres, then drop quickly through the 60 cm (2’) high heath vegetation to the ground, to then remain motionless.

All Katydids belong to the Tettigoniidae family, which is further divided into Subfamilies, of which Metaballus frontalis is placed into Tettigoniinae, these are commonly called Shield-backed Katydids in reference to the shield-like plate (pronotum) behind their head. These insects are quite diverse in many respects and regarding their diet can be either predaceous or herbivorous, or both. Metaballus frontalis falls into the ‘both’ category by feeding on other insects and/or flowers.

The head and body length was a little over 3 cm (11/4”) in length, the ovipositor projecting from the rear was another 3 cm, making a total (ex antennae) of over 6 cm or 2.5”, with the wing length in between. From observations of other Metaballus spp, they seem to be most active during pleasantly warm days, but not during particularly hot or cold periods.

Further reading: A Guide to the Katydids of Australia, by David Rentz.

Posted by William Archer at 5:11 PM