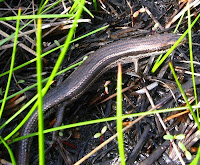 
Not much of a photo, but it does show enough for identification purposes. I have not spent much time photographing skinks, as they tend to quickly disappear into the bush being most uncooperative when it comes to remaining still long enough to focus the camera. However, this coming spring/summer period I hope to rectify the situation and with a little luck, get better photos along with additional species.

The above species has five fine black distinctive stripes running down its back. On the flanks the broad black stripe is bordered top and bottom by a fine white stripe, which I presume is where the common name of Three-Lined Skink originates. In the Eastern States there is an Eastern Three-lined Skink, A. duperreyi, where the white stripes are much bolder, making the common name more obvious. The local species is also known as the Southwestern Cool Skink, which is probably more appropriate as it prefers the cooler southern parts of WA.

During the breeding season mature males (and some females) develop a red splash on the chin and sides of their neck. Their preferred habitat are damp spots within dense vegetation around swamps, although they are partial to basking on low raised structures like sandy mounds, rocks or logs. They are active during the day hunting small invertebrates.
Posted by William Archer at 4:48 PM