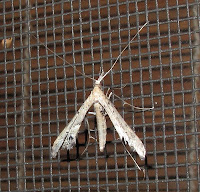 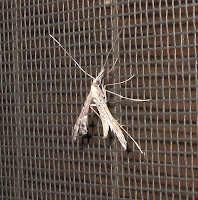 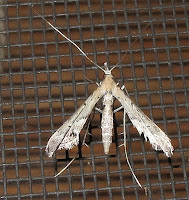 A small family represented in Australia by nine genera, with only a dozen species. They resemble the Plume Moths of the family Pterophoridae (Insects - Moths - Plume) by having feathered lower edges to their wings and long spiky legs.  They hold their wings horizontally aloft at an angle of 90 degrees to each other (Plume Moths are at 180 degrees), plus when at rest they keep their body raised well above the substrate.

The Tineodidae species shown above is around 1.2 cm (1/2") in length (excluding wings and antenae) and have been seen on warm and humid nights. Although these moths are more common in northern parts of Australia (and overseas), they are apparently not commonly encountered.

Posted by William Archer at 5:08 PM