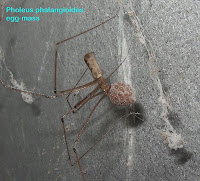 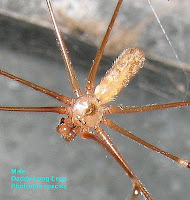 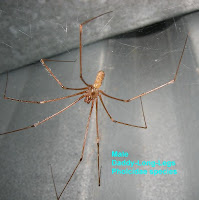 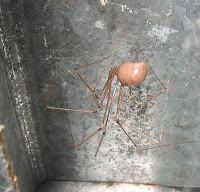 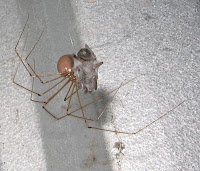 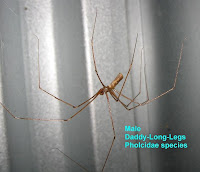 
Pholcidae in Australia comprise at least 70 species from 13 genera. The spider that most people consider to be a Daddy-Long-Legs belongs to the Pholcus genus, of which Pholcus phalangoides is widespread and often found in human habitation. Although easy to pick as a Daddy-Long-Legs, it is far more difficult to identify them further, as microscopic examination is required of the genitalia. So although it is odds on the photographed spider is the common one, you can rarely be 100% certain, so I shall refer to it by family and common name.


These spiders make a very untidy web with strands of silk going in all directions and for that reason are generally referred to as 'Tangle-web Spiders.' However their web is not sticky and not intended to snare prey, but for the spider to use as a retreat and await passing prey that are close enough for the spider to catch. This it does by manipulating the captive with its long legs to wrap it in silk and once immobilised to bite it until totally subdued, it is then usually taken back to the retreat for consumption. The female does not build an egg-sac herself, but lightly wraps her eggs in silk to carry around in a similar fashion to wrapped prey.


Daddy-Long-Legs will eat most small invertebrates, but what they particularly like to feast upon are other spiders, and will even visit their webs to entice them out, so they can use their long slender legs to catch them whilst keeping their soft vulnerable body well away from the fangs of far more ferocious spiders. In this fashion they will capture and eat other arachnids also with a liking for human habitation, like Red-back and Black House Spiders.


The male Daddy-Long-Leg Spider is not much smaller than the female and a similar sized male will often co-habit (unmolested) with the female for extended periods. Their long slender legs can span over 8 cm (over 3"), but their body will usually be less than 1 cm (3/8") in length. Although Daddy-Long-Leg Spiders can bite people, they very rarely do and their small amount of venom is regarded as completely harmless to humans.
Posted by William Archer at 7:09 PM