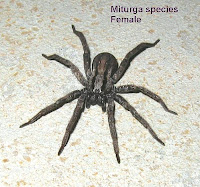 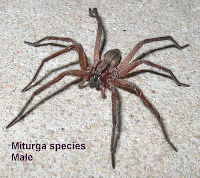 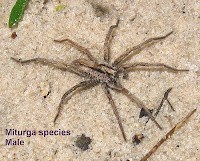 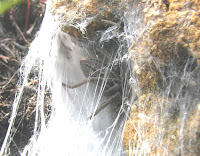 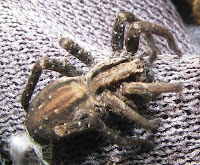 
These spiders are also known as Large Sac Spiders and currently consist of a small group of five genera with 27 species. In Western Australia there are only two genera with 10 species, of which the genus Miturga has nine. These are nocturnal ground spiders, hunting by running down their prey and superficially resembling Wolf Spiders in both action and appearance. They do not build webs, but some species construct at ground level and amongst dense vegetation or overhang, a compact white silken retreat to nurture their young.
The above local species is quite common and lives in a heath environment on sandy soils or on rocky outcrops. Excluding the legs, the female is around 2 cm (3/4"), with the male a little shorter but with longer legs. Common to these spiders is the dark body stripes that often run for most of their length and differ between species in width and number. Although they can give a painful bite, they are not considered dangerous to humans.
Posted by William Archer at 5:22 PM