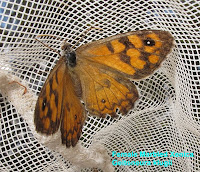 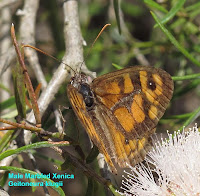 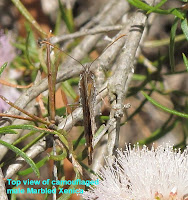 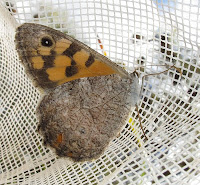 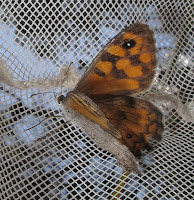 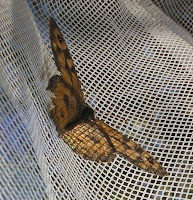 
The Marbled Xenica belongs to the Nymphalidae family, which are attractively coloured butterflies of complex brown, orange and black patterns. Another local and very common Nymphalidae species is the Australian Painted Lady Vanessa kershawi (see post under that name in the right hand column), which is similarly coloured, but noticeably much larger and prefers open environments.

Geitoneura klugii is to be found around Esperance in sheltered openings under or between trees and large shrubs, where ground vegetation is low and open. Here the male takes up a territory and flits about approximately a metre (3’) in elevation, landing periodically on the ground or low vegetation for lengthy periods. In this position he rests with his wings closed, enabling his coloration to blend imperceptivity into the leaf-litter. Occasionally he will open his wings as a possible sign to other males that the territory is taken, or to attract passing females.

The females are more restless and when they do land, keep their wings closed for some time, only opening them for a quick flash. They will check out the males territory, with the male keeping close contact and if they don’t like what they see, will move on, often flying higher than a metre to do so.

Males and females are of different sizes with the female larger to over 4 cm (little over 11/2”) wingspan, whilst the male is a little less than 4 cm. Although this does not sound like a big deal, their sizes are visually quite distinct. There are also differences in their wing pattern, the most obvious being the male having an additional solid bar in the centre of the upper wing, which in live (unpinned) specimens runs towards the abdomen. I should add that all my captures are released unharmed.