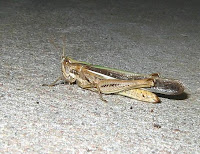 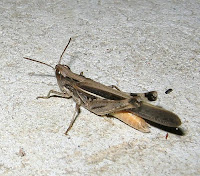 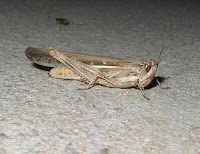 Aiolopus thalassinus belongs to the large grasshopper family Acrididae, along with the similar looking Australian plague locust, Chortoicetes terminifera, whose distribution reaches to a little north of Esperance, but whom no doubt will fly down periodically although not in plague numbers. The Australian Aiolopus has in fact a much larger distribution than the Australian Plague Locust, so you may ask why is it not also called a locust? The reason is not the physical difference between a grasshopper and locust, but a behavioural one! Locust swarm in huge numbers to migrate and devastate any agricultural enterprise encountered, whereas grasshoppers and this includes Aiolopus thalassinus, do not collect together in swarms nor migrate, and although they can congregate in large numbers and cause some damage to crops, they are nowhere near as numerous or devastating as true locusts.

This non-swarming behaviour of Aiolopus thalassinus is consistent throughout the world, where in subspecies form it occurs in warm and predominantly grassland environments. However they sometimes do take on some locust characteristics, like a feeding frenzy when food is plentiful and high in nutrition. resulting in a population explosion to then possibly pose a threat to local crops. However in Australia this threat is small, as with their non migratory nature, predators (of which they have many, including birds, mammals, reptiles, other insects and spiders) assist considerably in keeping their numbers in check, particularly in higher rainfall agricultural districts where predator numbers are usually higher, therefore Aiolopus thalassinus is rarely overly troublesome.

Locally, this grasshopper becomes noticeable when the weather warms in late spring and will persist (increasing in numbers) until late autumn, with some surviving into winter. When walking around bush-tracks during this period, invariably grasshoppers will suddenly lift-off at your feet to fly a short distance to then re-settle and most of these will likely be the Australian Aiolopus. In flight they have mostly clear, non-colored wings and are not particularly large, varying from 2.5 to 4.5 cm (1" to 13/4") in length (males generally being smaller than females).

My thanks to Dr. David Rentz for identification.

Posted by William Archer at 5:40 PM