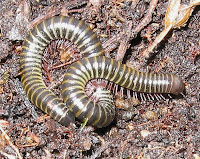 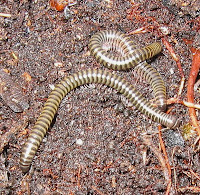 
Millipedes go back a very long way and around 400 million years ago were probably one of the first animals to venture onto dry land. With such a long linage it is not surprising that they have branched off into many forms and species, which today has resulted in 15 Orders and many Families, plus individual species that number in their thousands. However, these creatures are poorly known and vast numbers are yet to be studied and described. They are found worldwide favouring tropical regions.

The Order Spirobolida contains millipedes that are circular in cross-section and especially in the family Spirobolidae (as the above millipedes), can twist and turn their bodies in many directions and at the same time. These like other millipedes are able to discharge a very unpleasant chemical to discourage predators, which obviously works well as there are few.

In the Esperance region the millipedes from the Spirobolida order are commonly found under moisture retaining limestone or granite rocks. Elsewhere they also favour leaf-litter and the underside of logs, but locally these are either too dry, or not common, and if available are quickly colonised by ants that are reluctant to share. The flexible exoskeleton of these animals do not have a waxy coating to efficiently retain body moisture, so in order to survive they need moist and/or humid conditions, hence their liking for tropical conditions. Around Esperance with a much drier climate, they are most active from late autumn to spring and even then usually only at night.

Spirobolida millipedes can be quite large with some species reaching 20 cm (8”) in length, although around Esperance half that size would be regarded as being large. They tend to consume dead/decaying plant and animal matter, but some will eat small soft-bodied invertebrates when encountered, although being blind they are not active predators. However with this type of diet, they do not need to move around much and providing their habitat remains moist, are able to survive long dry summers with few adverse consequences. Therefore suitable habitat with local millipedes is their most important consideration.

Posted by William Archer at 5:12 PM