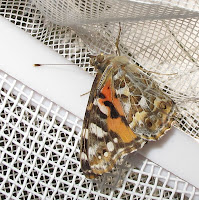 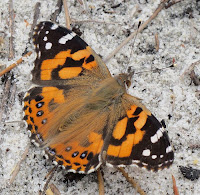 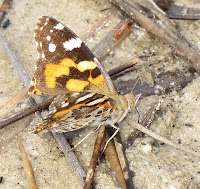 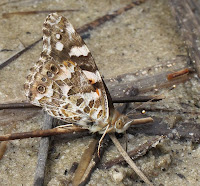 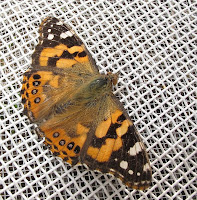 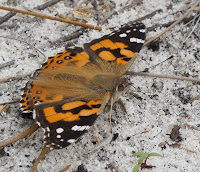 These orange, velvet textured butterflies belong to the Nymphalidae family and are commonly referred to as Nymphs. They range over much of Australia, except the hot/dry interior and are reasonably common around Esperance leisurely fluttering from one flower to another. However they are very difficult to approach, rarely letting you closer than a couple of metres (over 6’).

Their wingspan is close to 5 cm (2”) making them strong fliers, which on warm sunny days are able to move swiftly and acrobatically when required, although they tend to be slower and fly less on overcast days. When the weather is bleak, they will close their wings and perch largely motionless, which unlike their usual colourful presence, now merge remarkably well into surrounding vegetation.

Unlike the heavily forested regions of the Eastern States, the southern portion of Western Australia does not have a particularly large butterfly species list, numbering less than sixty, with most of these occurring around the tall timbered southwest corner of the State and the hills behind Perth. Around Esperance with its lack of large trees, drier and windier conditions, they are even less plentiful, the exception being the Australian Painted Lady and Common Grass-blue butterflies that are quite commonplace and widely distributed.

Posted by William Archer at 5:46 PM