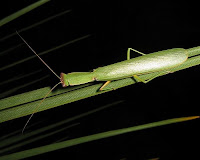 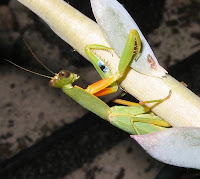 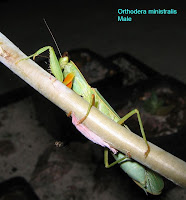 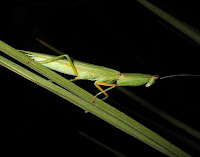 The genus Orthodera belongs to the Mantidae family, the largest Australian mantid family with 29 genera and 76 species (Australian Faunal Directory). Orthodera has 6 species of which two are found in Western Australia, but I have only noticed Orthodera ministralis the Green Mantid around Esperance, although the other O. gunnii may also be in the region. Mantids in the Mantidae family are distinguished from other mantids by having two rows of spines on the grasping section of the forelegs, whilst those in other families only have a single row.

An attractive feature of Orthodera mantids is the blue eye-like marking on the inside of the foreleg, which apparently varies in configuration between species. Orthodera ministralis is very common, occurring throughout Australia including Tasmania and often-encountered on mild, humid, windless nights hunting moths attracted to house lights. They have strong wings and are good fliers, so can be enticed to visit even from a distance; consequently you would probably know if they were in your district. Being ravenous insect predators, taking virtually anything they can overpower, they are good to have in the garden to help control insect pests.

This mantid grows to 4 cm (13/4”) in length excluding antennae and is around all year with the exception of winter, when presumably it dies, although I have seen larger mantid species that haven’t. Apart from birds and small carnivorous mammals, adult mantids would have few predators, but this does not apply to the young as the eggs are commonly parasitised by wasps, and the nymphs by most invertebrate predators including adult mantids, therefore a great incentive for them to grow quickly.
Posted by William Archer at 5:49 PM