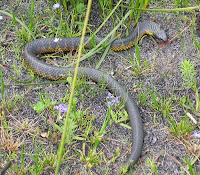 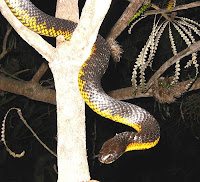 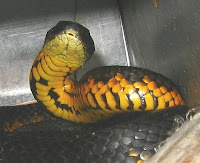 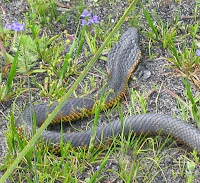 The most common snake in the region, probably because it is primarily a frog hunter and with all the ephemeral swamps in the district, frogs are usually plentiful. However they will also readily take birds, lizards and small mammals given the opportunity. They will commonly hunt during the day, or at night during summer/autumn when frogs are not so common. Another trick of theirs is they climb trees, particularly the 6-10 metre tall Coastal Paperbark, Melaleuca cuticularis, which they often do in spring in search of birds nests and any fledglings they may contain.

They grow to around 4' 6" (1.4 metres) in length and locally have similar consistent markings, that being a very dark back with an orange to yellow belly, with numerous similar colored bands around the body. However completely black snakes without bands, or with incomplete bands, can be found elsewhere, as can lighter colored tiger snakes but these usually have the body bands.

Tiger Snakes are highly venomous and can become aggressive if provoked (note the flatten neck in one of the photos), so they should be left alone. I have found if you treat these and other snakes with respect and do not threaten or attempt to harm them, then they are very accommodating to you and are not aggressive, even when suddenly happened upon, they simply get out of your way. Australia in a land of reptiles and we should learn to live with them as they are more than prepared to accept our intrusions into their world.


For further details about this snake go here:
http://natureitems.blogspot.com/search/label/05.%20%20Tiger%20Snake
Posted by William Archer at 6:16 PM