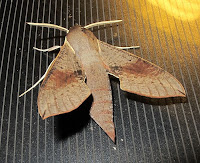 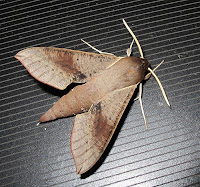 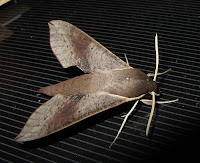 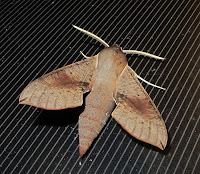 
Hark Moths belong to the Sphingidae family and in Australia there are 65 recorded species (Australian Museum), with most occurring in tropical and sub-tropical forested zones where often common. However I have only seen a single species and to date, only a single moth as shown above, so unless secretive, they are far from being common in the southeast of Western Australia, although probably more so in the forested southwest.

Hawk Moths are nectar feeders and like humming-birds, usually hover over flowers when feeding and are credited with the pollination of many plants as they probe tubular flowers with their long proboscis. The rapid wing movements required to hover indicates their relative physical strength and flying capability, which when fuelled with nectar can be considerable.

Hippotion scrofa is found over much of Australia and even overseas making it one of the most widespread of moths. The one above was encountered near Esperance on 24th December, which was a nice Christmas present, but probably coincides with its feeding habits. Like other Hawk Moths, it was a sleek impressive looking insect a little over 3 cm (11/4”) in head/body length.