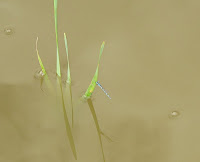 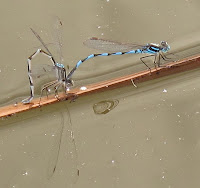 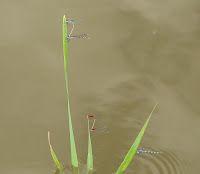 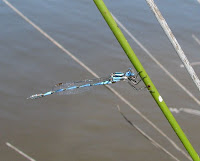 
From the Lestidae family, Austrolestes annulosus would be the bluest of all the Ringtail Damselflies and on that feature alone males can be identified from a distance. The female on the other hand is much less distinguishable, being a pale to very pale blue with a bronze dorsel colouration, but what they have in common is the forward facing arrowheads or triangle markings on most abdominal segments.


Locally, this damselfly is not particularly common, although odd individuals are usually present amongst other damselflies. They are noticeably larger than most other species that is further emphasised by the males flashy blue coloration, the duller females probably visit individual waterways to pair up with the resident male, mate, lay their eggs, then move on. When paired together, I found them to be very wary and will fly off if approached too closely (less than 1.5 metres or 5’).


Austrolestes annulosus is widespread in Australia, occurring in all States, including Tasmania, but is not found in northern Australia, apparently preferring drier and less humid summers. Like most of the local damselflies, the Blue Ringtail is most active during the warmer months from November to April, which here would be the driest time of the year. However as they quickly disappear at the first sign of colder night temperatures, these damselflies obviously like it warm and dry.

Posted by William Archer at 5:30 PM