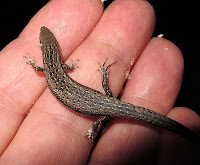 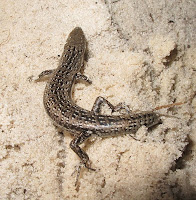 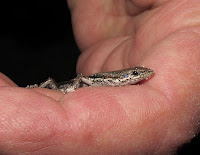 
Morethia obscura is one of the Flecked Skinks from the Scincidae family. It is reasonably common in the Esperance sandy heath region and in addition, distributed throughout the wheatbelt and across the Nullarbor, through southern SA and into the western areas of NSW and Victoria. However, its appearance varies considerably over its range from a lizard with few to no dorsal flecks, to extensive makings as the Esperance form above displays.

Besides the distinctive flecks, it can also be identified by the scales on its head and its five fingers and toes. The diamond shaped scale in the centre of the head and between the eyes, is with this species the largest scale with no corners cleaved off by a small separate scale. Also there are two small scales immediately above each non-blinking eye, whereas most other similar looking skinks have only one.

The Shrubland Pale-flecked Morethia grows to 14 cm (nearly 6”) in overall length and can be very fast making it difficult to photograph. The one above fell into a pit-trap and had dug itself a cosy underground shelter, so finding them in the first place can also be a problem, although they will seek shelter under logs or anything capable of concealment. Normally they stay close to vegetation, rarely venturing into the open except to dash to other cover.

These fast moving skinks are excellent hunters and use their speed to catch small grasshoppers, crickets, cockroaches and other invertebrates. Like most of the smaller skinks, they lay clutches of eggs in loose sand or undercover that are left without further parental assistance.

Posted by William Archer at 4:28 PM