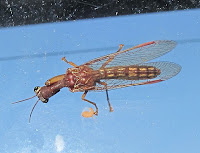 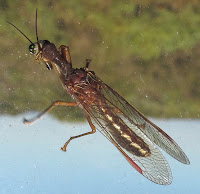 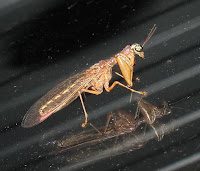 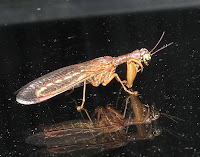 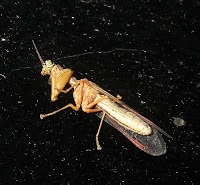 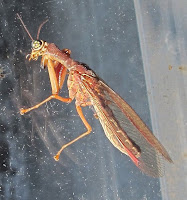 
Lacewings in the Mantispidae family are also known as Mantis Flies and belong to the Order Neuroptera along with Owlflies, Antlions, Brown, Green and Moth Lacewings, of which all are also found in the Esperance region. There are over 40 Australian Mantispidae spp., but around 400 worldwide, most occurring in tropical and subtropical regions. So presumably a limited number are in southern areas, including Esperance. The above is the only Mantid Lacewing I have encountered locally (seen during March) and as they are normally attracted to house lights (which are checked regularly), it would seem that they are most uncommon.

These lacewings have specially modified front legs that are formed and used in a similar way to the forelegs of Praying Mantids from the Mantodea order, which are used to capture and hold small prey. Regarding the photographed individual above, it has lost one of its grasping claws that are normally paired. It was a little over 2 cm (nearly 1”) in head/body length and strongly attracted to the house lights despite several attempts to get it to pose on a better photographic background.

Mantispidae spp. are easy to recognise, even when the claws are retracted as the neck is very long, plus the glossy transparent wings are set way back (like mantids) to permit operation of the raptorial claws. They are very interesting looking insects and initially you must think hard as to whether it is a mantis or a lacewing, but the transparent wings give it away.

The larvae of mantid flies have an unusual evolutionary adaptation by parasitising spider eggs. They will either burrow directly into a spider’s egg-sac, or hitch a ride until the female spider constructs the sac and enter it that way. The larvae will then feed on the eggs via a piercing/sucking tube formed by modified mouthparts.

Posted by William Archer at 5:18 PM