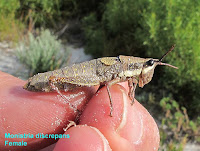 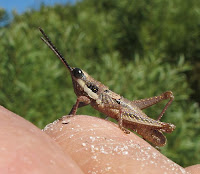 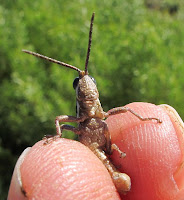 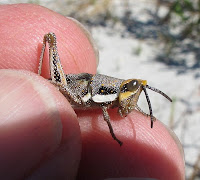 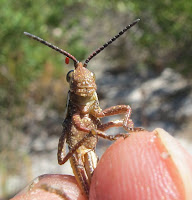 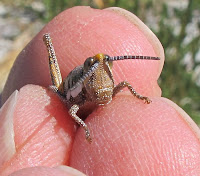 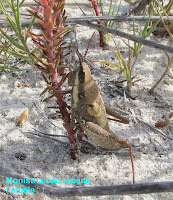 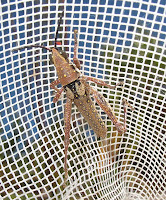 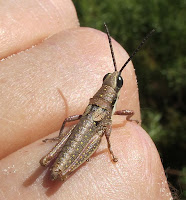 
The Monistria genus is part of the Pyrgomorphidae grasshopper family, which in Australia contains some highly colourful species sporting bright spots and stripes. Although they will readily hop to escape they are not particularly fast or cover much distance, which means if a predator was intent on catching them they would have little difficulty, particularly as they are often active during the day. However, predation does not seem to a major survival factor, which probably means they are either highly distasteful or poisonous and may reflect the type of vegetation consumed.

Monistria discrepans is called the Common Pyrgomorph, as it is widespread and found in the southern portion of WA and SA, then into northern Victoria, through most of NSW and a substantial region of Queensland. However in the Esperance district, I have only encountered it near the coast and associated with Myoporum insulare. A more locally common Pyrgomorph is Monistria latevittata, the Western Coastal Pyrgomorph (see: http://esperancewildlife.blogspot.com/2010/06/western-coastal-pyrgomorph-monistria.html), which occupies a variety of heathland habitats and is reasonably common.

Monistria maculicornis is also reported to be in the Esperance region, but so far I have not seen it. This species has a considerable number of orange spots (sometimes brilliantly so), giving the grasshopper an overall orange appearance. Forms of other species may also appear orange, but this is due to the background color and not the orange spots. Also with this species, the white stripe that underlines the black eye stripe, extends down to the femur top of both middle legs.

The Paraglossae (throat appendage often extending between the front legs) of Monistria discrepans is quite fat and solid, whereas with Monistria latevittata it is thin and much smaller. All of these grasshoppers prefer light sandy soil, often with bare surrounding ground and seem to have communal areas where a number of males wait for visiting females, so in these parts at the right time of year they can be quite common, but outside these zones difficult to find. The two labelled photographs above show females, whilst the other eight illustrate males.


Further reading: A Guide to Australian Grasshoppers and Locusts, by Rentz, Lewis, Su and Upton.

Posted by William Archer at 7:10 PM