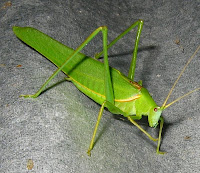 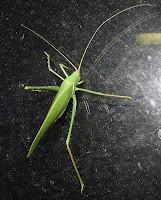 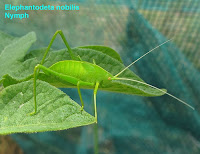 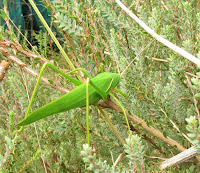 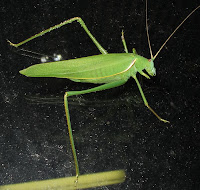 
Elephantodeta nobilis is a Katydid from the Tettigoniidae family and belongs to a group of similar looking large green species from several genera in the Phaneropterinae Subfamily. The Elephantodeta genus species are also known as Hump-backed Katydids and comprise two described species and apparently a number of undescribed ones. They are noted for living close to the ground and in dry habitats.

Locally, the Noble Bush Katydid although not common, is regularly seen during December and January, but it then either moves elsewhere or becomes increasingly secretive. It is usually active at night, but can be happened upon during the day and unless resting on a broad leaf plant, is quite obvious and I would imagine of great interest to birds. So maybe the successful Katydids that survive into autumn are at all times more discrete.

The head/body length of this species is around 3 cm (11/4”) in length, the wings extend another 2 cm or so, giving an overall length (excluding antennae) of 5 cm or 2”. The female’s ovipositor is strongly curved and wide and thought to be used to insert their eggs via cracks, under the bark of food plants.

For more information about this and other species, please refer to ‘A Guide to the Katydids of Australia’ by David Rentz.

Posted by William Archer at 5:06 PM