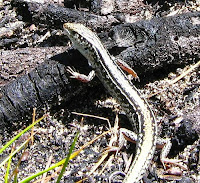 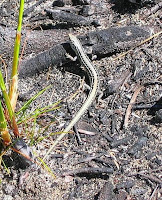 
A similar looking lizard to Ctenotus labillardieri the Red-legged Skink, but with an additional uneven black marking along the edge of the back, also the legs are not red. It differs from the Chain-striped Heath Ctenotus, Ctenotus catenifer (that also occurs in the region), by the black leg markings that are finely peppered in C. catenifer and strongly marked in C. gemmula.

The above skink was found after a bushfire on sandy heath, the heath habitat being another identification feature. Note the length of the tail, it is very much longer than the snout to vent length. This is yet another identification aid. Photography wise, the silvery brown back and the white sand was a bit reflective and over-exposed the photo a little, but I felt there was enough detail to include it here.

These lizards are also known as Comb-eared Skinks because just forward of the ear openings are comb-like scales. These can just be seen in one of the above photos, but are more clearly shown on the Red-legged Skink photos, Ctenotus labillardieri.
Posted by William Archer at 5:04 PM