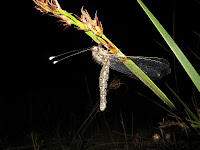 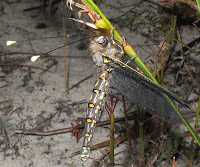 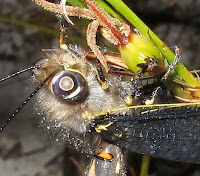 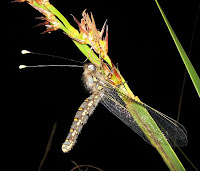 Although called an Owlfly, it is not a fly at all, but a Lacewing/Antlion. These insects belong to the Order Neuroptera and include several families, with Ascalaphidae containing some the most ornamental. Despite other Lacewing species being reasonably common locally, I had not encountered one of these before and at first sight with its expanded wings, thought it might be a dragonfly, but the elongated clubbed antennae soon put me right and later proved to be an important taxonomic feature.

Owlflies are distributed worldwide with Australia apparently having around 40 species and most of these occurring in northern regions where it is warmer and seasonally drier. The one photographed was discovered by its eye-reflection at night on a heath sedge-like plant around 15 cm (6”) off the ground and as these insects normally hunt during the day, was presumably at rest. Like dragonflies, Owlflies are also carnivorous and strong fliers, taking their prey on the wing, however they will usually rest as shown, whilst waiting for something edible to fly past.

The head/body length was a good 3 cm (11/4”) in length, and the orange spots edged in black literally glowed in the torchlight. The abdomen seemed to be semi-opaque, but may have been a light grey with splashes of yellow paint. I stress the word paint as all markings looked like they had been casually but artistically applied, yet this made the overall affect even more appealing. A very impressive looking insect and one I am pleased to have seen and been able to photograph.
Posted by William Archer at 5:45 PM