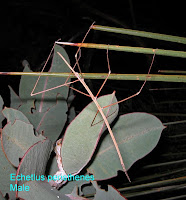 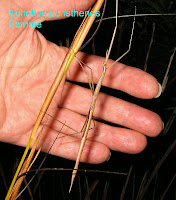 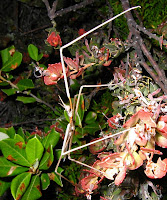 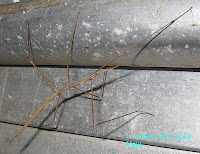 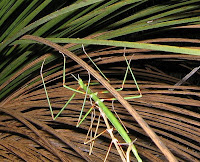 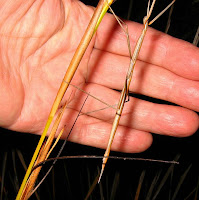 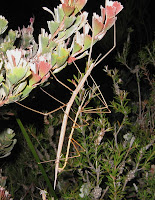 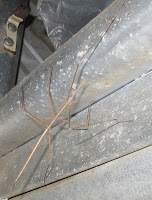 Echetlus peristhenes would be the most common Stick-insect in heathland around Esperance and can be found on a variety of vegetation during summer. Although I have seen the odd one moving around during the day, it is at night they are most active and likely to be seen.

The larger female (9-10 cm or nearly 4” in body length) can be either green or pale brown, while the male (just over half that size) locally has only been seen in various shades of brown, although they are also described as being green, so a variable species. The upper parts of the legs are red in males and females, but are sometimes indistinct on brown individuals. The male has a dark line through the eye and is lightly coloured on the back of the head, usually with a thin vertical line. The most consistent features however, are the regularly spaced black dots along the top leg sections (femora) and the cerci (the appendages at the end of the abdomen) that are twice as long as the abdomen anal segment of the female, and even longer with the male.

Mating around Esperance has been noted from January to March and can last several hours. Once the eggs are ready, they are simply dropped to the ground by the female, where they may be preyed upon, lie undisturbed or carried off by ants attracted to a small edible growth called a capitulum. The ants bury the entire egg and will only consume the capitulum, so inadvertently providing a safe resting-place until the nymph emerges. Although the nymph is similar to the adult, they must go through several moults until they reach sexual maturity and be able to breed.
Posted by William Archer at 7:34 PM