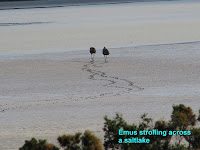 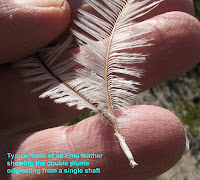 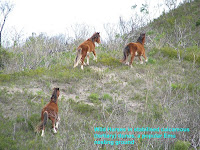 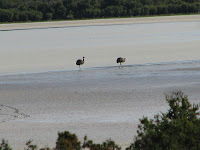 
There is very little point in trying to sneak up on an Emu as they are very alert and have far better eyesight than any human. So if you want to get closer and you are in an area where they are not used to people, play on their curiosity and attract them to you. To do this, do not look directly at the bird, but quietly and without sudden movement, do something daft, like holding one hand in the air like an emu and peck around the ground, plus if you can ruffle your feathers that is an added bonus. Usually, slowly but surely they will come within a few metres to checkout this weird creature.

Emus can run very fast and keep it up for several kilometres, I have clocked them effortlessly running through low bush at over 45 km (28 miles) an hour and they could go even faster if required. As their running ability is their main means of avoiding trouble, they tend to keep to reasonably open country, particularly when with chicks. These days with less frequent burning (as practised by pre-European aboriginals), heathland tends to get too thick for fast running, so around the Esperance coastal regions they mostly breed and raise their young in the stabilised (calcareous) tertiary dunes, where low dryland sedges dominate to keep the environment more open. The same applies to mallee regions where lower rainfall limits shrub growth and dominance.

Another reason the dunes are favoured is because of the high number of heath species (Ericaceae, particularly Acrotriche and Leucopogon), which grow there. These small shrubs produce fleshy berries that are consumed in great numbers and by so doing, the emus spread the seeds widely; with Acrotriche they will also eat the clusters of small green flowers that are fleshy and sweet with nectar.

An interesting feature of Emus is their feathers, which produce two from the one shaft. The only advantage for this that comes to mind is the greater number of plumes for any given area, which would provide greater insulation and possibly hinder ancient predators (humans are currently their only predator, although small chicks are sought by many both native and introduced). The feathers can grow to 45 cm (18”) in length and are very soft as they do not have the little hooks, which lock other birds feathers together to enable flight, but as the emu is totally land bound, they have no need of them.

As most will know, it is the male bird that raises the chicks, initially sitting on the eggs, then protecting them until they reach maturity. It is obviously a difficult occupation and experience is required to be successful, as many young  breeding males will lose to predators, all or most of their brood, whereas older males will often raise 3-5 chicks.

Emus can grow to 2 metres in height and have very powerful legs that have large strong claws, which can deliver a fatal blow to predators, but fortunately they fear people so rarely attack humans, although best not to stress a bird with small chicks. Emus that are familiar with people can be very dangerous and unless you are very sure of their demeanour, great care should be taken. On one occasion I was talking to a zookeeper who had a single emu behind a 5 foot high wire fence. I had my back to the bird who was some distance away, when suddenly I heard this galloping, but before I could turn around, it felled me with a single blow to my neck with its beak. As I was on the ground, it then tried to kick me, but the wire fence stopped it, so I was lucky as it could have been very nasty. So beware of emus that are familiar with people, but enjoy the antics of wild ones!

Posted by William Archer at 6:51 PM