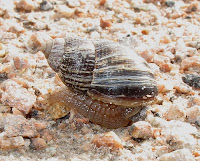 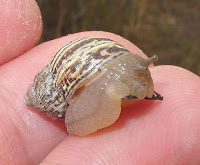 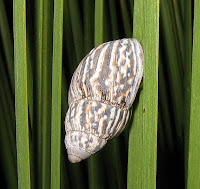 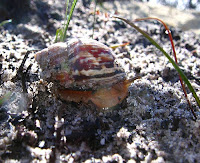 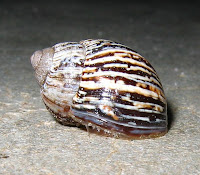 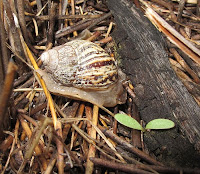 
Surprisingly throughout Australia there are hundreds of Land Snail species, belonging to a considerable number of families. Naturally the eastern States with their higher rainfall, particularly the northern areas have the greatest number, but they are also found in arid regions. Around Esperance Land Snails are not uncommon, even in the dry mallee district as their dead shells testify after bushfires. Most local species are members of the Bulimulidae family that are obviously well adapted to low rainfall conditions, although locally are mainly active from June to October when conditions are generally cool and moist.

I usually encounter these molluscs at night, early morning or near dusk, but they are never in any quantity making them always a pleasant surprise to encounter. Most land snails are herbivores and feed only on vegetation (living or dead) and fungi, but are not attracted to vegetable gardens like introduced snails that are rightfully regarded as pests. To obtain the calcium required for shell making, they will grind particles of limestone, a common feature of mallee regions, which might explain why they are so numerous there. No doubt they also frequented coastal calcareous dunes, but have probably been displaced by the introduced Italian Snails that can occur is plague proportions, although thankfully rarely venture into neighbouring non-calcareous (heathland) zones.


Some of the local native snails can grow to over 3 cm (11/4”) in shell length and going on dead shell clusters (after fires) must periodically gather together for reproduction or a desirable food source. Above are at least two photographed species and possibly as many as five, but the differences between them are not easily discernible unless detailed inspections are made of the animals, especially a comparison with identified shell collections. There are undoubtedly many other Land Snail species in the Esperance region, particularly in remote districts or unusual habitats, but to find them would require specialised knowledge plus the dedication to do so.


Update July 2011
Two photographs of the common Esperance region mallee land snail. These snails have shells to 3 cm (over 1”) in length that are commonly encountered throughout the region, although those containing live animals are seldom seen. 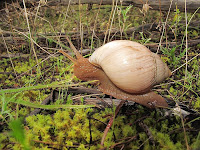 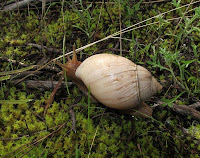 Posted by William Archer at 4:08 PM